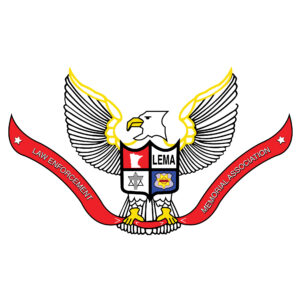 ​If you are interested in being a member of the LEMA Honor Guard, please fill out this application.

In 1991, the LEMA Honor Guard was established so that Minnesota officers who die in the line of duty receive the ceremony, honor and dignity that such a sacrifice deserves at the time of their funeral. A secondary mission of the Honor Guard is to serve as a constant reminder of Minnesota officers who stand ready to give their lives if duty calls. Until the activation of the LEMA Honor Guard, ceremony was only provided by local veterans organizations, often only in cases where the officer was a veteran.

Members of the LEMA Honor Guard receive cross training on all honor guard duties, but are assigned to one of three main team:

LEMA Honor Guard members are each issued a dress uniform consisting of a black coat and pants with gold piping. A gold shoulder cord is displayed on the left side of the jacket. Each officer wears the badge of their own agency on their coat, but a common LEMA badge on the ceremonial white hat. Honor Guard members wear clarino leather belts and shoes and their own department handgun. Each member is issued a M14 Rifle.

Insignia on the right chest of the officer indicates various training and event participation:

The LEMA Honor Guard, officially formed in 1991, is a ceremonial unit of active duty law enforcement officers from departments throughout Minnesota. This 36 member unit is trained to provide military honors at funerals for Minnesota peace officers who have died in the line of duty.

The LEMA Honor Guard has been trained by the US Army 3d Infantry, The Old Guard, in memorial affairs. The Honor Guard can carry out various missions including Colors Details, Firing Party, and Casket Details including pall-bearing and ceremonial flag folding.